As Burmese military and paramilitary forces unleash the barbaric acts of violence on the Rohingya Muslims, it once again begs the question of why states and international organisations usually seem so utterly incapable (or perhaps reluctant) to help people who are oppressed in the most brutal of ways. Despite their relative inaction, these states and organisations still seem to maintain a self-image of moral propriety. Perhaps this tenuous image is partially sustained by a discourse of “human rights”. However, despite being imagined as a driving force of global good, a “human rights” discourse often paradoxically acts as a cover for political incompetency and/or ideological agendas.

First, let us understand the predicament of the Rohingya. In Burma, they have always been seen as outsiders, foreigners, illegal Muslim immigrants from Bangladesh. The Rohingya were not recognised as one of Burma’s ethnic groups, were given foreign identity cards, and even stripped of their citizenship as a result of which “their rights to study, work, travel, marry, practice their religion and access health services have been and continue to be restricted.”

The Rohingya, therefore, now stand as one of the world’s largest body of stateless people. They serve as the perfect example of what Giorgio Agamben calls homo sacer. Stripped of a political identity, the Rohingya have been reduced to “bare life” – their bare human self – where nothing is left of them except their humanity.

The Rohingya Muslims of Burma are reported to be the most oppressed people on the planet.

But aren’t “human rights” meant to be the universal (pre-political) rights of every human being “as such”, regardless of their citizenship? Ironically, as Hanna Arendt points out, it is precisely when one is stripped of their political identity and reduced to a mere human being – the precise moment when one becomes the true “man of rights” – that the concept of “human rights” breaks down:

The conception of human rights based upon the assumed existence of a human being as such broke down at the very moment when those who professed to believe in it were for the first time confronted with people who had indeed lost all other qualities and specific relationships except that they were still human.

Herein lies the paradox of human rights. “[It] is precisely when a human being is deprived of the particular socio-political identity that accounts for his determinate citizenship that – in one and the same move – he ceases to be recognized or treated as human,” explains Žižek.

Therefore, following Etienne Balibar who argues for a reversal of the man/citizenship relationship by “explaining how man is made by citizenship and not citizenship by man”, Žižek argues that we arrive at “a kind of political version of Foucault’s notion of sex as generated by the multitude of the practices of sexuality. ‘Man’, the bearer of human rights, is generated by a set of political practices which materialize citizenship…”

The Rohingya have, unfortunately, found themselves caught in one of the most devastating consequences of this “human rights” paradox. Ironically, the Rohingya were deprived of their human rights at the very moment they were left with nothing but their humanity, and thus (at least theoretically) became the ideal bearers of those rights. They were treated like non-humans at the very moment they were reduced to being nothing but humans. 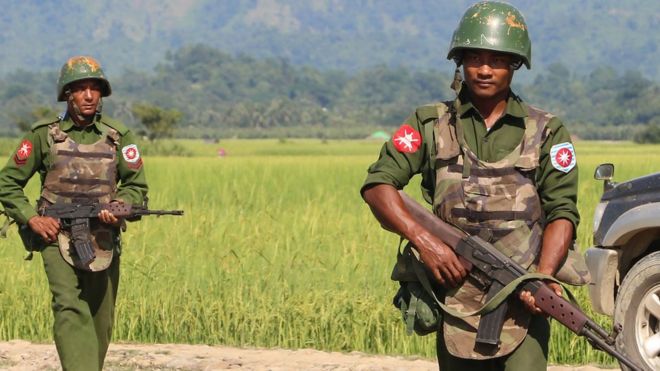 The Burmese military has carried out brutal massacres against the Rohingya.

Take the response of Turkey and Bangladesh, for example. The response of both these states to the massacre of the Rohingya has been primarily “humanitarian” in nature. Turkish President Recep Tayyip Erdogan apparently convinced Myanmar State Counsellor Aung San Suu Kyi over the phone to allow Turkish aid to be distributed in the Rakhine state. Also, Turkey’s First Lady Emine Erdogan visited Rohingya refugees in Bangladesh. While Turkey does seem to be more active and vocal than other Muslim countries in terms of helping the oppressed Rohingya, when one compares these token acts of charity with the kind of political and military actions Turkey undertakes in the name of fighting “terrorism” or even the threat of military action over the recent Kurdish referendum, one cannot help but wonder if the choice to cast the Rohingya crisis in humanitarian terms rather than labelling the actions of Burmese military as state-sanctioned “terrorism” is a deliberate choice to justify a specific mode of response (humanitarian) and avoid others (political, military).

For Bangladesh, the primary issue has been whether to allow Rohingya refugees into Bangladesh or not. The Bangladeshi government has, in the past, turned back Rohingyas fleeing persecution, and even restricted aid distribution to those who were already in Bangladesh living in refugee camps in squalid conditions. The Bangladeshi Prime Minister Sheikh Hasina had said in an interview with Al Jazeera that it was not Bangladesh’s responsibility to help Rohingya refugees.

Although Bangladesh has recently allowed in Rohingya refugees, the crisis has already been framed in terms of the responsibility to take care of the fleeing Rohingya. Once Bangladesh opened up its borders to the Rohingya, it almost seemed like the Bangladeshi government had fulfilled its moral obligation to help the Rohingya. What has been ignored is a discussion on the requirement for concrete political, and possibly even military (given the Burmese military’s involvement), actions to curb the Burmese government and army from carrying out the most despicable acts of violence against the Rohingya, and to hold the perpetrators to account. 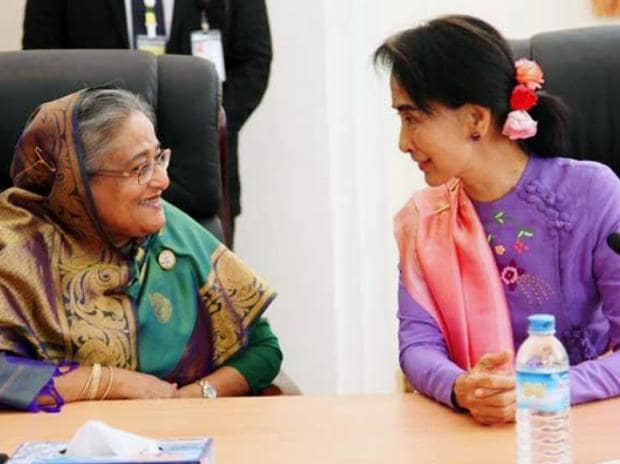 Recently Hasina met Rohingya refugees in Bangladesh and apparently “spoke out” for them. Yet, soon after the recent crackdown on the Rohingyas began, the Bangladeshi government proposed to the Burmese government that they conduct joint anti-terror operations along the border, thereby fully endorsing the narrative that Burmese authorities have used to justify their brutal military operations against the Rohingya.

Therefore, while adopting a de-politicised humanitarian discourse on the Rohingya issue, Bangladesh has in fact sided politically with the Burmese government.

Discussing the issue of the growing number of refugees in our times, Agamban notes this divide between humanitarianism and politics as one of the reasons why “[humanitarian] organizations and individual states prove themselves, despite their solemn invocations of the “sacred and inalienable” rights of man, absolutely incapable of resolving the problem and even of confronting it adequately.”

…humanitarian organizations – which today are more and more supported by international commissions – can only grasp human life in the figure of bare or sacred life, and therefore, despite themselves, maintain a secret solidarity with the very powers they ought to fight.

If merely taken as abstract ideas, “human rights” seem to be the noble and lofty ideals of the modern world. Yet, when we ground these ideas in the way they play out in the real material world, we find that they often act as a veneer of morality used to cover some of the worst kinds of oppression.