Most of us would have heard about the oppression our Muslim brothers and sisters are facing in Burma. This has been happening for many years now so it is certainly not something new. Below we show only 6 of the hundreds of instances (in no particular order) of oppression faced by the Rohingya, who are often referred to as the most oppressed people on Earth. May Allah (swt) make it easy on them.1. Myanmar “Massacre” 2017 August/September – Hundreds of thousands have been forced to flee their homes with hundreds of men, women and children killed. Those who attempt to escape the carnage face a dangerous journey over water, where drowning is also a real possibility. Shootings, stabbings, beheadings, burning alive and being thrown into mass graves are just some of the horrific things that have happened to the Rohingya during this latest round of violence at the hands of Myanmar state forces and crazed Buddhist mobs. 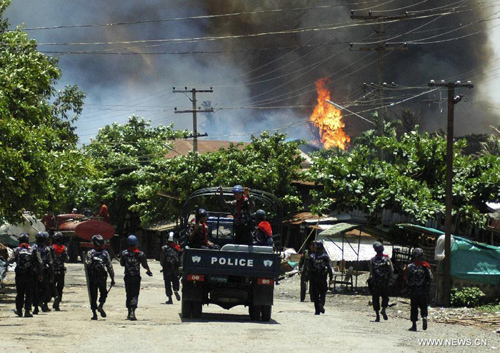 June – 90,000 displaced, over 1300 houses burnt to the ground and close to 60 dead when the Burmese army and police went on a riot. This was an act that was praised by the US and European Union.

October – 20,000 displaced, thoousands of homes burnt and 80 dead. Rohingyas are not allowed to leave their settlements due to “security concerns”, and are the subject of a campaign of commercial boycott led by Buddhist monks.

April – 400 Buddhists armed with bricks and sticks overran mosques and torched more than 100 homes and shops in Okkan, killing two people and injuring at least ten more. Another 77 homes were destroyed in the nearby villages of Yadanakon, Panipin, Chaukthe and Thekon. The riot reportedly began when a Muslim girl on a bicycle accidentally bumped into a Buddhist monk, knocking over his alms bowl.

July – A Facebook post emerged of a Buddhist woman being raped, supposedly by a Muslim man. In retaliation an angry, vengeful mob of 300 people started throwing stones and bricks at a tea stall. The mob went on to attack Muslim shops and vehicles and shouting slogans in Muslim residential areas. A dozen injured and one dead with a curfew being imposed.

May – 200 dead, over 10 mosques destroyed, over 400 houses burnt down. 20 Muslims who were praying in one of the Mosques were killed and some were beaten to death by the pro-junta forces. 2 Mosques were bulldozed.

Late 2016 to Early 2017 – Authorities in Burma (army and police) launch a military campaign against the Rohingya with over 1000 deaths, mass displacement of refugees, forced relocations and claims of women and children being raped. A horrific period of time that saw already wholesale oppression turn into unchecked murder, slaughter and violence. Numerous harrowing reports emerged of rape being used systematically as a weapon against the Rohingya, as well as setting villages on fire and stabbing/beating people to death.

We present this list so that we may understand that the present situation of the Rohingya is unfortunately the latest in a continuing cycle of oppression and violence. The confronting reality of the situation is that our Muslim brothers and sisters in Burma have no protection whatsoever – no police force, no security, no army and no government that will come to their assistance. The impotence of the Muslim world in this regard is a damning indictment of nations that use the labels of “Muslim” or “Islam”, but when it comes for something to be done according to the values of those markers, they are nowhere to be seen. Only Allah swt can assist our Rohingya brothers and sisters, so we pray to Him that He grant them protection and allow a fundamental restructuring of the Muslim world such that we can avoid these terrible situations to begin with.