The devastation we witnessed in Aleppo in the last few months once again made it clear that the Muslim rulers willfully keep their distance from the Ummah and the responsibility of its protection. Yet we also saw those who would find no end of excuses to absolve these rulers of the inexcusable. It would seem arguments and proofs of any sort would not suffice, and therefore, there seems little hope in addressing them. After all, if the bloodshed in Aleppo can’t make someone at least question their misplaced loyalties, truly, what can?

However, there is another kind of approach that some can take regarding Muslim rulers that is worth addressing. This approach seems to “allow for praise when the occasion calls for it”, and condemnation when they so deserve it. It takes a somewhat (supposedly) “balanced” approach towards the rulers, their actions and policies. The King of Saudi Arabia, King Salman. Some offer in his favour the argument that he has done much to fund the upkeep of the two Holy Mosques.

One of the premises that allows such an approach is to hold that “each individual action of the rulers should be judged separately on its own merit”. So the train of thought goes that if it is good, we praise it. If it’s bad, we condemn it.

But the problem here is that, while each individual action may be good or bad, focusing on them atomistically (that is, individually) lets us turn a blind eye to the ugly story that may be revealed if we linked the individual actions together to see the larger context, the overriding pattern of behaviours, actions and attitudes, and their effects on the people and places we are supposed to protect.

Here, a brief discussion on some verses of Surah al-Baqarah is in order so we can appreciate the importance of seeing actions and events within their larger contexts.

So do you believe in some parts of the Scripture and not in others? [Baqarah: 85]

The Bani Isra’il were asked this question. But why?

In the preceding two verses Allah reminds them of the covenant He took from them.

And (remember) when We took a covenant from the Children of Israel, (saying): Worship none but Allah (alone) [Baqarah: 83]

Ayah 83 mentions a number of commands which Abu Sa’ud says relate to the rights of Allah or those that resemble the rights of Allah. The first of these commands is to worship none but Allah. It is worth mentioning that this first command of not associating anyone with Allah actually comes in an informative form as opposed to an imperative form. However, as Abu Sa’ud explains in his tafsir, this informative sentence is actually in the meaning of a prohibition, and this form of prohibition is, in fact, a more emphatic way of prohibiting something than a direct prohibition. The Kings of Morocco and Saudi Arabia.

In verse 84, this style of emphatic form of prohibition returns, but this time the Qur’an enumerates prohibitions in relation to the rights of people:

And (remember) when We took your covenant (saying): Shed not the blood of your (people), nor turn out your own people from their dwellings. Then, (this) you ratified and (to this) you bore witness. [Baqarah: 84]

After this, it is you who kill one another and drive out a party of you from their homes, assist (their enemies) against them, in sin and transgression. And if they come to you as captives, you ransom them, although their expulsion was forbidden to you. [Baqarah: 85]

The above verse relates to the actions of the Jewish tribes in Madinah, Banu Quraydhah and Banu Nadir.

Banu Quraydhah were allies of Aws, one of the warring factions in Madinah prior to the migration of the Prophet. And Banu Nadir were allies of Khazraj, the other warring tribe in conflict with Aws. When Aws and Khazraj would fight, these Jewish tribes would also fight against each other with their respective allies in contravention of their covenant. 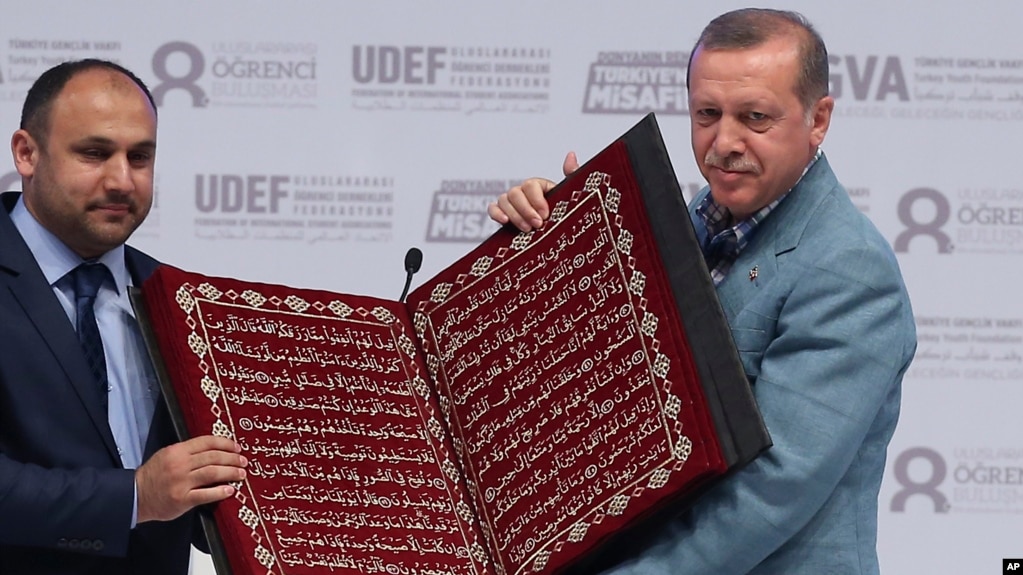 Erdogan is touted for his supposed assistance to other Muslims as a point in his defence by some who support him.

As we have seen in the above verses, the Bani Isra’il were commanded to 1) not kill each other, 2) not drive each other from their homes and also, according to Imam al-Suyuti, 3) ransom each other out of captivity if anyone of them is taken captive. However, they violated 1 & 2. As for 3, they would gather money and ransom Jewish prisoners of wars because their covenant required them to do so.

But what does this act of charity mean anyway? They are the ones who killed them, destroyed their homes, drove them out of their homes and caused them to be prisoners in the first place! Hence, the Qur’an reminds them: “…while their very expulsion was unlawful for you!”.

Then comes the harrowing question:

So do you believe in some parts of the Scripture and not in others? [Baqarah: 85]

The way that these verses reframe the outwardly charitable gesture of the Bani Isra’il is of utmost relevance for us today. So, yes, we’ll have our Muslim governments today who do some good actions, if we look at these actions in isolation. Some of them implement some seemingly “Islamic” policies. Some protect the holy mosques. Some help and fund some rebel groups to fight oppression. Some take in refugees from war-torn countries. Some give charity. Some express sympathy for the suffering of the Muslims. Yet, when these token acts of goodness are contrasted with other actions or omissions, any possibility of goodwill on their part fades away into thin air.

They implement some “Islamic” policies here and there, yet staunchly uphold secularism and democracy. They protect the holy mosques, yet don’t protect Muslim blood. They provide some meager help to groups comprised of ordinary people fighting oppressors, yet keep their well-funded, well-armed and well-trained armies locked up in barracks. They take in refugees, yet ally and rub shoulders with those tyrants who bomb Muslim lands to pieces and thereby create refugees. They give a little in charity, yet steal an exorbitant amount more from the Ummah’s wealth. They express sympathy for the suffering of the Muslims, yet are the very cause of their suffering.

In the face of these paradoxes, it might be tempting to chalk things up to the complexities of world politics, the supposedly clandestine “Islamic” project of the rulers, the Western pressures they are under and the dire consequences of standing up to such pressures.

To be fair to these notions we can say the following. World politics is complex but that does not mean we can’t tell oppression when we see it. And even if the rulers’ “Islamic” project may be clandestine, that does not justify their clear outward contraventions of the Shari’a. And, they may be under Western pressure, but what’s the worst that can happen if they did resist? How much worse can the consequences of resisting such over-exaggerated “pressure” be than what is already happening in the Middle east, Africa, the Subcontinent and the list goes on?

Our stance on the current Muslim governments will inevitably have a bearing on our politics and our vision for the Muslim world. That is why it is important, especially at times like this, that we review our position so as to be able to respond appropriately to the situation, with whatever little means we have, even if it be just our words. The bare minimum we can do is speak out and hold our rulers to account. And what must be absolutely avoided at all costs is to justify their actions and thereby become players in a game tilted against a very vulnerable Ummah.